I once went to the Whitman-Walker Clinic with Billy so he could get his Botox injections. The clinic was only a few blocks from his apartment, but he said he wasn’t feeling great and didn’t think he could make it there on his own. We were friendly that way even though Billy also sold me drugs.

He was waiting for me hunched over on the bottom step of his building’s stoop, his head down, and his eyes cupped in palms.

“Why does an AIDS clinic give out Botox?” I asked. The name Whitman-Walker made me think of HIV-meds for poor people, the uninsured, the unlucky.

Billy reached out a hand. I pulled him to his feet. He wore a sweatshirt, and as we walked, I saw that he shivered, his chubby stomach jiggling with each spasm. “It’s a healthcare organization,” he said. “They do whatever.”

At the corner we stopped and waited for the WALK signal. The sun blazed, a reflected star in the windows of the townhouses lining the street. I tilted my head so the rays could warm my face.

“Look at it this way.” Billy hugged himself and stamped his sneakers. “I get my wrinkles erased and a mother of three can afford a pediatrician.”

I put my hand on his forehead. “I think you have a fever,” I said.

The light changed, but we stood there, the timer for the blind counting down the seconds. “Maybe you should go home,” I said.

“Are you crazy?” He shoved his hands beneath his armpits. “It’d be a month before I got another appointment.”

We kept on. Billy could barely keep pace with me. When he leaned against a lamp post, I draped the sweatshirt’s hood over his head.

“So take something!” Billy mimicked. “I’m saving what’s left for when I get there.”

I spun him around by the shoulder. I said, “You’re out?”

“Yeah.” His eyes were dull pearls.

Your dealer out. I couldn’t think of anything worse.

He noticed my expression. “Cut the worrying. Just get me through this.”

We were there on a Tuesday, testing day. I knew this because of a sign taped to the front door. A bunch of guys shuffled across the lobby’s dusky linoleum, not making eye contact, waiting for instructions. I recognized most of them even though our faults lay exposed in the daylight.

Billy slipped past the crowd and told the receptionist why he was there.

She tapped the keys of her computer. “You don’t have an appointment.”

There was more clicking.

“I really have an appointment,” Billy said.

I saw my friend Ian swallowed in the sagging, mint-green cushions of the waiting room couch. His knees were higher than his waist, and his hands hung between his legs. I left Billy arguing with the woman.

At my approach Ian said, “The moment of truth.” His face was so open and pale he looked twelve years old. He was more beautiful than I’d ever seen him, a martyr from a Renaissance painting. I didn’t think it was fair Ian had this kind of thing looming over him.

He handed me a brochure that explained everything. You swiped the inside of your cheek with a testing stick, like sucking on a popsicle, zipped the specimen end into a plastic bag and wrote your assigned number on the outside. The number ensured the test was anonymous.

Some old guy came over and sat next to Ian. His receding hairline made him seem devious. You also have to understand I thought then anyone over twenty-five was practically the grim reaper.

The guy said, “Don’t be nervous.” He patted Ian’s clasped hands. “You won’t know the result until Tuesday.”

“Great. I get to shit myself the whole week,” Ian said.

“Let me tell you my first time.” The man looked familiar, but I was sure I’d never seen him before. “Josh and I had the same doctor. I went in for a checkup and my doctor said, ‘So, is your relationship open, or more don’t ask, don’t tell?’ And I’m like, Jesus, I guess don’t ask, don’t tell.”

I took the empty cushion, and dust coughed up. I sneezed.

“You weren’t asking and he wasn’t telling,” Ian said, his tone familiar, as if he knew this wandering stranger.

“My doc’s like, ‘We better draw your blood.’ Next thing, I’m sitting there, the nurse strapping my arm with a rubber tube.”

“I hear the pills aren’t too bad,” Ian said.

“They have those names like weird foreign countries,” his friend said. “Places you’d never want to visit.”

“Crap.” Ian was looking at someone across the room. “I slept with that guy’s boyfriend.” He stood and handed me the wand and the ticket with his number. The zipper on Ian’s jeans danced in my vision. He went for the exit.

I didn’t know who Ian meant. Half the guys in that room had probably taken a tumble with him at some time or another.

“Anyway,” the guy continued, sliding over. “What do I think about right then? The last time I got stuck by a needle. A tetanus shot before I went to Guatemala with Josh, the bastard.”

The guy didn’t have a ticket. Given a moment to consider him, I now saw his eyes were like someone who’d come through a long, restful sleep.  He talked. “Our guide took us to a spot where they’d just carved some temples out of the jungle.”

A voice called: “Twenty-nine.” Ian’s number. I wondered if he’d run the swab inside his mouth. I touched the end. It felt dry. I wrapped the ticket around the stick and put everything into my pocket.

“Is that where they filmed Star Wars?” I said.

“Temples naked as newborns, the place completely empty.” He waved his hands to conjure the vista. “We climbed a pyramid. From a ledge we watched the sun fall behind the mountains. All around was this clearing, totally new.”

Sometimes I think I hallucinated the whole thing. That the guy really wasn’t there. Kind of like the angel from that movie who talks to the famous actor on the bridge.

I heard Billy singing. “I’m so pretty, I’m so pretty.” They must have found his appointment. He was at my side, his face a stretched sheet.

His lips pulled back. He showed me teeth, bright and full. 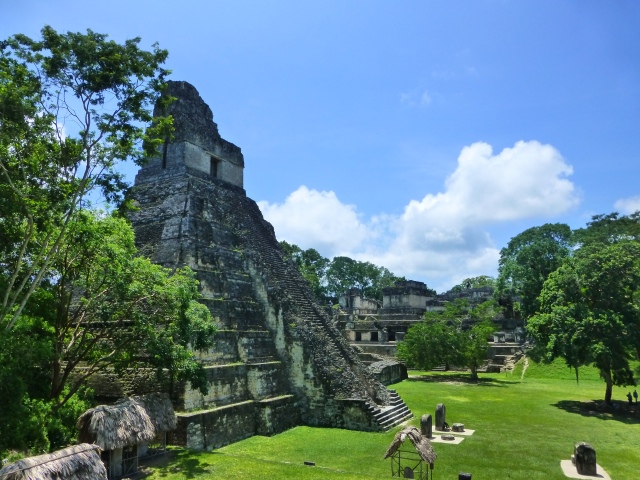 Stefen Styrsky's fiction has appeared in The Offing, Number Eleven Magazine, Inch, and the Tahoma Literary Review. A few years ago he earned an MA degree in fiction writing from the Johns Hopkins University. Stefen lives in Washington, DC.
View all posts by Stefen Styrsky →
This entry was posted in Flash, Short Stories, Stefen. Bookmark the permalink.