Hitchcock Truffaut and Some Thoughts on Craft

Posted on November 3, 2016 by Stefen Styrsky

Artists of all types – writers, painters, composers, et al. – have always drawn inspiration from work by other artists in their chosen fields. I’m often inspired to write after reading a really good story, one I find beautiful or clever or engaging. For me, the adage holds: A writer is a reader moved to emulation, and I wonder if that’s a maxim shared by all creative pursuits. A painter is a gallery-goer moved to pick up a brush? I don’t know, but I imagine even if it’s not, it’s a recognizable sentiment.

Yet, analyzing a different genre for how it creates certain effects or solves an aesthetic problem, even appropriating ideas and techniques from another mode of art, can be just as inspiring. And if you think such borrowing isn’t respectable, maybe even cheating, I can assure you it has a long history. It’s not just a practice of our post-modern, mash-up (some might say inspirationally exhausted) culture.

A few examples: Shakespeare’s plays are an overstuffed jumble of history, myth, legend, song, and even plots lifted from earlier works. (He was definitely one of those great artists who “steal,” as T.S. Eliot put it.) Rainer Maria Rilke learned the art of observation from the sculptor August Rodin and used it to transform his poetry into something completely new for the time. Truman Capote employed fictional techniques when penning the true-crime story In Cold Blood, and in turn reinvigorated the non-fiction genre. Stanley Kubrick’s composed, nearly-static movie frames obviously owe a debt to photography, if not classical painting, but which he used to create an eerie distance between film and viewer. And while narrative verse is nothing new, Autobiography of Red by Anne Carson, a novel in verse form, combines faux-scholarship, ancient Greek myth, and the epic poem with a modern setting and some very contemporary ideas about love and sexuality to create a work of incredible power and empathy.

This is all to say that while watching the documentary Hitchcock Truffaut I learned something about film-craft that I thought writers might also gainfully employ.

A bit of background. Hitchcock Truffaut is based on a book of an interview Francois Truffaut conducted with Alfred Hitchcock over the course of a week in 1962. Truffaut, a young director of the French New Wave idolized the older Hitchcock. At the time, the depth of Hitchcock’s artistry was little appreciated. He was considered merely a confectioner of audience-pleasing thrillers. Truffaut, however, recognized Hitchcock as something much more than that. The interview was his way of rehabilitating the senior man’s reputation.

And so in this mega-interview Truffaut takes Hitchcock through his entire film oeuvre, first speaking of what he admires, what he found interesting or innovative, and then has Hitchcock elaborate on how scenes were filmed, why he made certain aesthetic choices, what he intended with particular images.*

At one point, Truffaut observes that Hitchcock is the master of controlling time. Many of his scenes, that in real life might take only a few seconds (such as two men fighting for control of a bomb detonator, or a woman reaching into a safe for a handful of money) Hitchcock lets run on beyond any realistic notion of how long the moment would truly last.

Here we get to the cross-fertilization point I want to make. Consider what happens when a writer employs the slow-time technique to a scene in a story, prolonging it as a writer would, going into detail about the environment, the characters, their actions, what they see, think, hear and feel – in other words with much more detail than one would could reasonably note in a few seconds.

For example, here is a passage from the story Blue Boy by Kevin Canty.

Kenny stood in the kitchen door, next to the winter coats, men’s and women’s woolen overcoats hanging on their pegs like abandoned persons. In the dead of summer these coats seemed exotic as sponge divers’ outfits. There was a man’s good gray overcoat hanging on the rack, a husband’s coat. Kenny felt an obscure jealousy, as if he were married to Mrs. Jordan, as if the child sleeping under the water had been their own child, born into the air again. On an impulse, Kenny put his hand into the pocket of the overcoat, a soft solid pocket meant for a bigger hand than his, and brought out a passcard for the Washington subway, a white cotton handkerchief, a scrap of gum wrapper and seven dollars, two singles and a five. Kenny kept the money and the passcard and stuffed the handkerchief back into the coat pocket, the yellow gum wrapper fluttering to the floor in his hurry. Now this ordinary hallway felt dangerous, as if it had suddenly been raised fifty feet off the ground, so that walking it required care.

Guy standing in hallway hung with coats. That could’ve been all of two sentences. Canty instead pauses to draw out every detail, in the process turning a placeholder or transition scene into something of great import. But also notice how the prolonging of any forward plot momentum reveals Kenny’s character.

Hitchcock understood this. You can watch his movie people reveal themselves during such moments, forks of indecision that expose their psychological operations. Similarly, it’s a way for a writer to get the reader to pay close attention to a crucial moment with later significant ramifications. If Kenny is willing to rifle the pockets of a coat belonging to a near stranger what else is he also willing to do? What will he do? Why?

I think a writer should always be on the lookout for such out-of-genre inspiration, using it simply as an exercise or prompt, or employing it in her work when it seems appropriate. Why not write a story that follows a repetitive structure similar to one of a villanelle or a ghazal? What about a piece of music with a consistent base line that supports alternating rhythms and melodies?  Or a play in which dialogue and action do all of the psychological lifting?

Writers are told to read widely in order to become better writers. I think writers should also watch, look and listen widely. 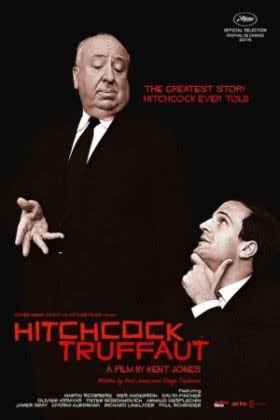 * While the documentary goes into some detail about Hitchcock’s work, it mostly talks with contemporary directors about what they learned from his films and the book Hitchcock Truffaut. It’s a fascinating census. I’ll just say that if you watch contemporary movies, you are watching Hitchcock. Some of the best directors of the past thirty years operate under his influence. Like Chekhov, who taught the world how to write stories, Hitchcock taught the world how to film movies.

Stefen Styrsky's fiction has appeared in The Offing, Number Eleven Magazine, Inch, and the Tahoma Literary Review. A few years ago he earned an MA degree in fiction writing from the Johns Hopkins University. Stefen lives in Washington, DC.
View all posts by Stefen Styrsky →
This entry was posted in Hitchcock, Stefen, Writing Craft. Bookmark the permalink.

1 Response to Hitchcock Truffaut and Some Thoughts on Craft