The Panic in Needle Park

While reading a book have you ever wondered: how would this style translate to film? Not the story’s events or a character’s appearance. The actual style, the tone of the writing. Visually, how would a director replicate Bellow’s exuberance, Cheever’s mania, or Munro’s compassionate and generous detachment?

Recently, by chance, I had the opportunity to witness this. It was about a third of the way into The Panic in Needle Park (1971) a film directed by Jerry Schatzberg and screenplay by Joan Didion. Young girl, Helen, (Kitty Winn) in Manhattan meets charming, affectionate Bobby (the very youthful Al Pacino), a street hustler and heroin addict. They begin dating and Helen soon falls into addiction as well. It’s a basic story.

Knowing the screenwriter’s name, I realized this was how Didion’s novel Play It As It Lays would feel if turned into cinema. That novel tells the story of Maria Wyeth, former movie actress, current low-grade addict, and all-time sufferer of modern ennui. Except for a brief first-person opening, Didion’s narrative is pure surface — dispassionate third person. There are occasional lines about how a character feels or what they think, but never about anything beyond the current dramatic situation on the page.

For example: (Silver Wells is the defunct town where Maria grew up.)

“What do you think about it,” Maria asked Carter.
“About what.”
“What I just told you. About the man at the trailer camp who told his wife he was going out for a walk in order to talk to God.”
“I wasn’t listening, Maria. Just give me the punch line.”
“There isn’t any punch line.”
“Do you think he talked to God?”
Carter looked at her.
“I mean do you think God answered? Or don’t you?”
Carter walked out of the room.
The heat stuck. The air shimmered. An underground nuclear device was detonated where Silver Wells had once been, and Maria got up before dawn to feel the blast. She felt nothing.

That’s perhaps one of the starker passages. Much of the novel is not quite as oblique, or as baldly symbolic, but the excerpt is a good example of its tone.

And how does this translate into The Panic in Needle Park? Take the opening scene, when Helen comes home to the apartment she shares with her artist boyfriend, Marco (Raul Julia). She’s just had an illegal abortion and it’s made very her ill. Marco reacts as if nothing’s wrong. He actually leaves her alone in the apartment to collect some money owed him. It’s Bobby a few minutes later who shows concern for Helen. That begins their relationship, as well as her descent.

Yet, the film asks the viewer to intuit not only Helen’s attraction to Bobby, but also her willingness, you might even say need, to immerse herself in a world that’s not going to do her any good. It’s documentary in style. Matter-of-fact, cool, nonjudgmental: no music to conjure emotions; seemingly random conversations over cigarettes in rundown diners; junkies nodding off in squats; cops and street life and scores. Never a pause to explain anything to the audience.

In other words, the tone of Play It As It Lays transferred to the screen. Now, The Panic in Needle Park is based on a novel of the same name. I haven’t read the book, so I can’t say how it depicts events. Perhaps it has a similarly bleak tone. But I imagine Didion’s style is what really comes through in the film version. 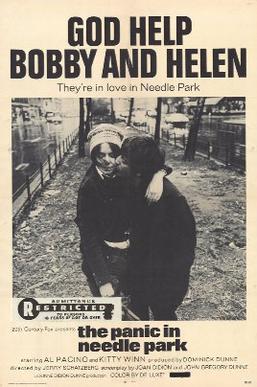 Stefen Styrsky's fiction has appeared in The Offing, Number Eleven Magazine, Inch, and the Tahoma Literary Review. A few years ago he earned an MA degree in fiction writing from the Johns Hopkins University. Stefen lives in Washington, DC.
View all posts by Stefen Styrsky →
This entry was posted in Books Into Movies, Didion, Stefen. Bookmark the permalink.